NanoBrook is part of a family of benchtop zeta potential analyzers, many of which also include sizing capability. By measuring the zeta potential of droplets in micro- and nano-emulsions, it is possible to predict the shelf stability of a given formulation.

There are a number of models available in the NanoBrook family, the most popular ones  for Zeta Potential include the ZetaPALS, 90Plus PALS and the NanoBrook Omni, all of which include Phase Analysis Light Scattering (PALS), an ultra-sensitive method for measuring zeta potential.

The 90Plus PALS and Omni  have the ability to measure particle size by Dynamic Light Scattering (DLS).

The NanoBrook is an open platform that allows the instrument to be upgraded at any time. 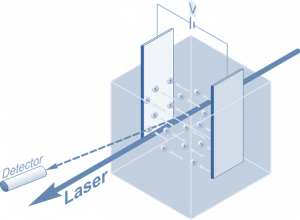 Zeta Potential (ζ) for Predicting the Stability of Emulsions

A cannabinoid nanoemulsion is a dispersion of oil droplets suspended in aqueous solution. Oil droplets are generally metastable, meaning that in the absence of any sort of stabilizing force will tend to coalesce into larger and larger droplets, eventually leading to visible phase separation.

For the extract to be shelf stable it must be able to resist these attractive surface forces that would otherwise drive droplets towards one another.

The most effective method to impart colloidal stability onto a dispersion of oil droplets is via addition of an amphiphilic molecule which can encapsulate the oil droplet, allowing it to be dispersed in an aqueous (polar)  medium.

These systems are commonly used in food, pharmaceutical, and CBD encapsulation.1 Commonly used encapsulating agents include liposomes, as well as a number of commercial nonionic triblock copolymers.

The latter form polymer micelles, which sequester their hydrophobic blocks on the interior, avoiding exposure to the aqueous medium, and can be used to solubilize sparingly soluble small molecule cargos such as cannabinoids. 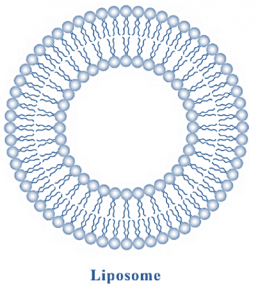 Amphiphilic molecules can self-assemble into a wide variety of different structures each of which would result in a slightly different encapsulation mechanism. Illustration reproduced from Deng, Foods 10.6 (2021): 1354.

While most surfactants are capable of encapsulating nonpolar cargos including charged and nonionic surfactants, the most effective method to prevent droplet coalescence is via electrostatic stabilization (repulsion of surfaces with like-charges). Typically, this requires a formal surface charge to be imparted to the surface of the droplet.  This surface charge will create  a repulsive force that will limit the tendency of two droplets to approach each other, and thus preventing  physical contact that leads to coalesce.  Careful selection of an emulsifying agent will limit the growth of droplets, resulting in a surfactant stabilized emulsion with droplet dimensions from  tens to hundreds of nanometers. 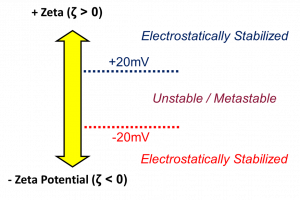 Zeta potentials of less than 10 mV provide a minimal barrier to aggregation and droplet coalescence. Higher zeta potentials serve as the basis for electrostatic stabilization.

When the mixture cannabinoid extract and carrier oil are encapsulated using charge carrying surfactants, these nanoemulsions will move in response to an electric field. Such systems are easily characterized by electrophoretic light scattering, either by ELS or PALS. The magnitude of the measured zeta potential obtained from light scattering is generally predictive of the stability of a given emulsion.  The zeta potential (ζ) threshold for electrostatic stabilization is greater than 10-20 mV.

A nanoemulsion with a high conductivity presents challenges for traditional ELS measurements. The PALS technique is preferred for samples with high conductivity since it is more salt tolerant and provides for a higher sensitivity.

There are two common methods for measuring zeta potential from light scattering, both of which are based on electrophoretic light scattering.  With both methods a sample is added to a cuvette and then blackened palladium electrode is inserted. A laser light source is used to measure the light scattered by particles placed in an electric field. The first method is known as laser doppler electrophoresis which uses a DC voltage to influence the movement of the cannabinoid droplets in the nanoemulsion.  The electrophoretic velocity, or velocity of the particle in an electric field, is then normalized to field strength giving an electrophoretic mobility, and then finally used to calculate a zeta potential from one of several standard models (Smoluchowski, Hückel, or Henry).3

This method, typically referred to as ELS, works well for low conductivity samples, including standard colloids and nanoparticles.  The second method, Phase-Analysis Light Scattering (PALS),4 is based on similar principles, but instead utilizes an AC  voltage. The use of AC allows for a more sensitive measurement to reliably measure much lower magnitude zeta potentials. The PALS method is suitable for samples that have much higher conductivities including those that are at physiological ionic strength or higher.

The most commonly used of the three models to calculate zeta potential is the Smoluchowski equation, where the zeta potential, ζ, can be calculated from knowledge of the electrophoretic mobility, μelec, as well as the viscosity, η, and the dielectric of the continuum liquid, εo as follows:

All three of models, Zeta PALS, 90Plus PALS, and Omni, have both ELS and PALS measurement modes with a preference based on sample conductivity.

In light scattering instruments there are multiple angles used for detection. In Dynamic Light Scattering (DLS) the measurement of cannabinoid droplet size can benefit from the availability of several different scattering angles (θ = 15o, 90o, and 173o ). Zeta Potential Analyzers on the other hand, typically only make use of forward scatter angles (θ < 15o).  This is done to minimize the effects of diffusion broadening.  All of Brookhaven’s NanoBrook series Zeta Potential Analyzers utilize a dedicated reference beam path, where the reference frequency, or demodulation frequency in the case of PALS, is set via a piezoelectric modulator. 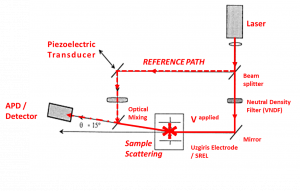 All NanoBrook Zeta Potential Analyzers use a dedicated reference beam path for both ELS & PALS.  Both measurements are commonly performed using an Uzgiris electrode.

The reference and sample scattering signals are then combined prior to being detected by the 15 o fiber. The detector is a low dead-time avalanche photodiode detector (APD). The APD module is an advanced single-photon counting device, that replaces photomultiplier tubes (PMT) as the photon counting devices of choice for light scattering instruments.  Modern APD’s have lower deadtimes (< 25 ns) and have greater sensitivity than a PMT.