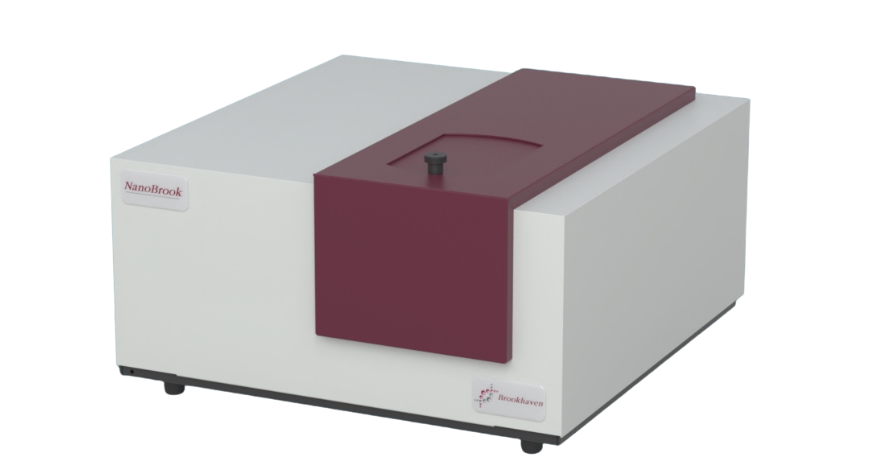 The NanoBrook is part of a family of benchtop dynamic light scattering (DLS) instruments, capable of measuring droplet sizes in cannabinoid nanoemulsions.

There are several models to choose from, the three most common include the 90Plus which can be used for measuring droplet size, while the 90Plus PALS includes the ability to measure zeta potential. The third option is the Omni which includes a 173o backscatter detector that provides the best signal-to-noise and reproducibility for droplet sizes smaller than about 50 nm. The 90Plus and 90Plus PALS can be upgraded to an Omni, as needed.

A cannabinoid extract is composed of oil droplets of relatively large size. A single droplet can exceed 4000 nm (4 μm) in size. Oils are generally hydrophobic, and also lipophilic (fat soluble) and as such will be sparingly soluble in water.

For the cannabinoid to be adsorbed into the blood stream it must be chemically processed during digestion. Not only is the digestive process slow, but the efficiency or amount adsorbed is impacted by the inherently large sizes of the droplet.

For THC-containing products, such as edibles, this can result in overconsumption due to the delay in feeling the euphoric effects. It has been found that when a nanoemulsion is prepared from an extract, the cannabinoid is rapidly adsorbed into the bloodstream (figure 2) and the onset of effects felt will be felt within 10-15 minutes1.

A non-nanoemulsion cannabinoid consumable product in a cookie-form was shown to have less than 10% of the THC absorbed when eaten2. In contrast, when encapsulated in in nanoemulsion the absorption process is much more efficient and it possible to see a 65% increase or more.1

How is Particle/Droplet Size Measured?

Droplet size can be measured by dynamic light scattering (DLS). In a conventional benchtop DLS instrument the sample is placed into a cuvette, and subsequently inserted into the sample holder. The sample is then illuminated by a monochromatic laser light source, and the scattered light is then measured at a well-defined detection angle (on benchtop instruments common angles include θ = 90o and 173o).

For the 90Plus and 90Plus PALS scattered light is measured by a detector placed at a right angle (θ = 90o) from incident laser beam. The Omni includes an additional detection angle (θ = 173o). Large scattering angles, typically referred to as backscatter, provide the best signal-to-noise and reproducibility for particle sizes smaller than about 50 nm. In contrast lower angles (θ = 15o or lower) tend to amplify the contributions from larger droplets.

The standard laser used with the NanoBrook platform is a continuous, temperature controlled, 640 nm monochromatic diode laser, with a maximum output power of 40 mW. 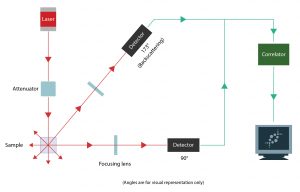 The semiconductor laser offers advantages over a gas-type laser including a compact size with a high-power output and stability that is ideal for benchtop instrumentation.

The different scattering angles are coupled to the detector via pre-aligned fiber optic cables, which carry scattered light from the sample cell to photodetector.  The detector is a low dead-time avalanche photodiode detector (APD).

The NanoBrook family includes a research grade correlator (BI-TurboCorr), a high speed digital signal processing device, that converts an optical signal (a series of rapid photopulses) into an autocorrelation function, that can be converted to a particle size distribution using a variety of advanced algorithms (including Cumulants, NNLS, and Contin). This correlator is the same device used with our research goniometer (the 200SM). It has 510 hardware channels for processing data, and can be programmed with a variety of correlator layouts tuned for different applications. When used with our advanced DLS software the correlator layout can also be programmed manually (accessing delay times as fast as 100 ns (25 ns with the high speed option) and as long as tens or hundreds of seconds.

One of the factors that impact DLS measurements is temperature. As temperature changes the viscosity of the solution changes. Any change in viscosity impacts the velocity of the particles that are subject to Brownian motion. The NanoBrook family incorporate a Peltier device in the cuvette holder. The Peltier device maintains the desired temperature to prevent changes in viscosity. The use of a 40 mW diode laser, avalanche photo detector, correlator with 510 hardware channels, and Peltier temperature control are the primary components of the measurement system that provides for research grade measurements of cannabinoid nanoemulsions in a compact benchtop design.

Measure the permittivity of low conductivity liquids such as cannabinoid oil, extracts, and surfactants with the BI-870 dielectric constant meter.